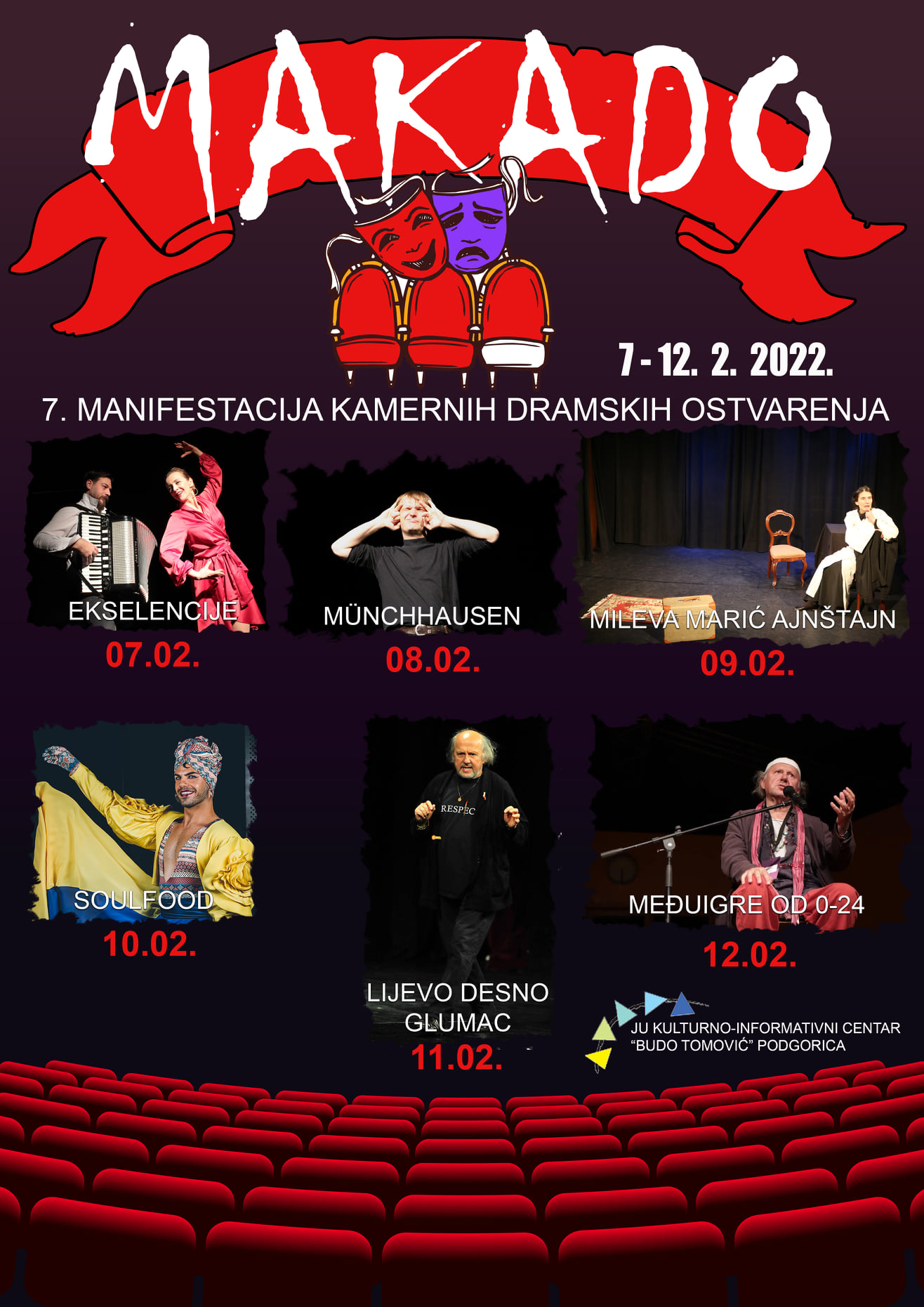 Theater lovers will have the opportunity to enjoy the VII KIC Manifestation of Chamber Dramatic Achievements MAKADO, which will be organized from 7. to 12. February 2022. in Dodest hall.

As of this year, MAKADO has a new concept, so it will take on the international character of a prestigious competitive review of chamber works from the region and beyond. Five performances in the competition part will take part in the festival, while one guest performance will be shown in honor of the winners, on the last night of the festival.

The festival council made a unanimous decision that in times when many events are closing down, a new impetus is needed for this very well-designed and visited festival, so the competitive atmosphere and the “Clock Tower” award will be an additional motive for the organizer KIC “Budo Tomovic”, Capital Podgorica, as well as the entire Montenegrin and regional scene. The award will be given for the best play, the best male or female role, as well as for bravado. The jury will consist of writer and playwright Vasko Raičević, playwright Jelena Milošević and actor Filip Đuretić.

The seventh manifestation of chamber dramatic achievements will be opened by the witty drama “Excellencies” on February 7th. After the successful January premiere, the audience of MAKADO will have the opportunity to watch a new KIC production based on the text and directed by Obrad Nenezić, in which the main roles are played by Žaklina Oštir and Jovan Dabović. “Excellencies” belong to the modern drama theater, where the audience will have the opportunity to watch “play within play”. In this witty drama, no one is forcing the heroes to lose their identity, except for their incoherent ambitions and appetite for success, which seems to be at their fingertips…

The second night, 8. february will be dedicated to the Croatian monodrama “Münchhausen” directed by Boris Kovačević, based on the text by Gottfried Burger, with Vilim Matul in the lead role. It is a piece of EXIT theater – Zagreb in collaboration with the theater production MOVENS. Among other things, the play deals with the phenomenon or art of lies, just as Baron Münchhausen, a notorious liar, does. A play that has been successfully performed since 1998. had more than 500 performances, and Matula, without any scenography, special effects and partner support, masterfully evokes all of Münchhausen’s adventures.

The play “Mileva Marić Einstein” will mark the third evening of the event, 9. February. Justin Theater Production and M.A.M.M.A Production – Sweden in cooperation with: ABF Stockholm and with the support of the City of Stockholm, UK Parobrod-Belgrade and the House of Đuro Jakšić-Belgrade bring the story of mathematician, physicist, scientist Mileva Marić Einstein-wife and Albert Einstein’s greatest love. The screenplay and direction are signed by Jelena Mila, who also interprets the role of Mileva Einstein, with the partner support of Miloš Andjelković.

Montenegrin monodrama “Soulfood” directed, dramatized and adapted by Slavko Kalezić, who also plays the main role, will be performed 10. February, as part of the fourth day of MAKADO. Based on the novel of the same name by Žana Poliakov, an inspiring read that is a “sensational introduction to a happier life”, this monodrama takes the audience through various life themes. It corresponds in many ways to the current situation in the world and can serve as an ideal material for overcoming all the difficulties that the pandemic has imposed on man.

The author’s project of Zijah A. Sokolović “Left Right Actor” will mark the fifth day of the event, 11. February. Sokolović, witty, philosophical, cabaret, with a series of examples and a comparison of reality and theatrical art, teaches viewers to understand that they are also “actors in their theater and can be artists in their lives.” It is a project produced by YUGOART from Belgrade, which is also a play, lecture, team building, workshop.

VII MAKADO will on Saturday 12. February solemnly, outside the competition, close the author’s cabaret Zijaha. A. Sokolović “Interludes 0-24”. This cabaret wants to touch the reality and lack of logic of all human action with the awareness that man is trapped in civilization and loneliness that it is his natural state and that it cannot be cured but can be alleviated. On the same evening, the director of KIC, Snežana Burzan Vuksanović, will officially present the “Clock Tower” awards to the best according to the expert jury. The author of the statute “Clock Tower” is Marko Petrović Njegoš.

All performances within the main program will be played in the Dodest hall starting at 8 p.m.

Another novelty is that two tribunes will be held in the accompanying part of the festival. On the topic “Theater and Politics” 09. February in the Multimedia Hall of KIC at 12 p.m., doc. dr Edin Jašarović will speak, while playwright and screenwriter Marija Sarap will speak on February 11. at 12 p.m. on the topic “Theater and Pandemic”. Talks with them will be led by journalist Vanja Kovačević.

Also, within the accompanying program 12. February at 12 p.m. in the hall Dodest will be performed poetic performance MetaLpoetika, which will be attended by former and current participants of the Gymnasium “Slobodan Škerović”. The author of the program is prof. Sonja Šaković.

Tickets can be purchased at the price of 5 euros at the KIC ticket office. Information and reservations on the number 020 664 237. 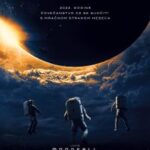 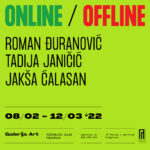