One of the most important tourist resources of Montenegro and Podgorica. A rich flora and fauna, crypto-depression and the settlement of rare an endangered species of birds like curly pelican, make it unique in the region and beyond. It offers visitors a lot of satisfaction and opportunities for recreation. There are hiking and biking trails, boat and ship cruises, rest on the beach, visits to the island`s churches and monasteries. An island and a unique village on Skadar Lake is Vranjina. It is known as Montenegrin Venice, because of its natural ambience and specific atmosphere. There is located a Visitors Center, where are the releifs of all National parks in Montenegro, information about the natural and cultural heritage of each, as well as exhibits of animal species. Nearby the Center there is an island and Fort Lesendro from the 18th century. 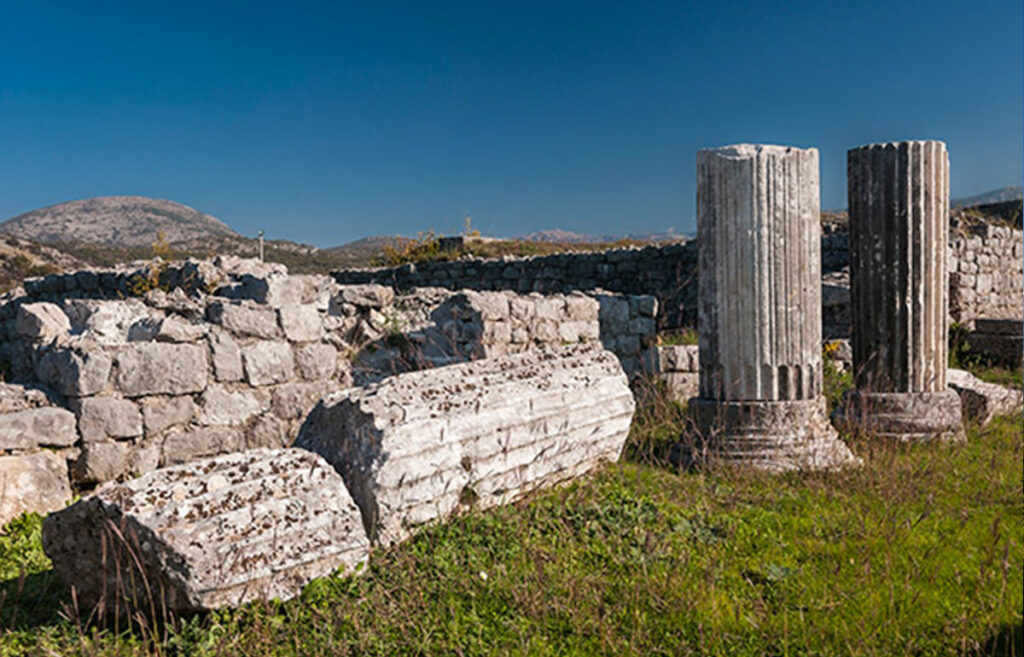 At 4 km from the center of Podgorica on a wide plateau between the rivers Morača, Zeta and Širalija, are the remains of ancient Doclea, from the first decade of the first century AD. From the 4th century, on the east side of the city, the area where Christians live stands out, churches and a large episcopal basilica were built. Some valuable specimens of the found grave inventory – pottery and glass vessels, pieces of jewelry, tools, weapons and money, form part of the permanent exhibition of the City Museum. Ancient Duklja was introduced to world archeology with the discovery of the famous Podgorica glass, which is kept today in the Russian Hermitage Museum.

The first archaeological excavations began at the end of the 19th century and are still ongoing. For more information, visit: antickadukljacg.com. 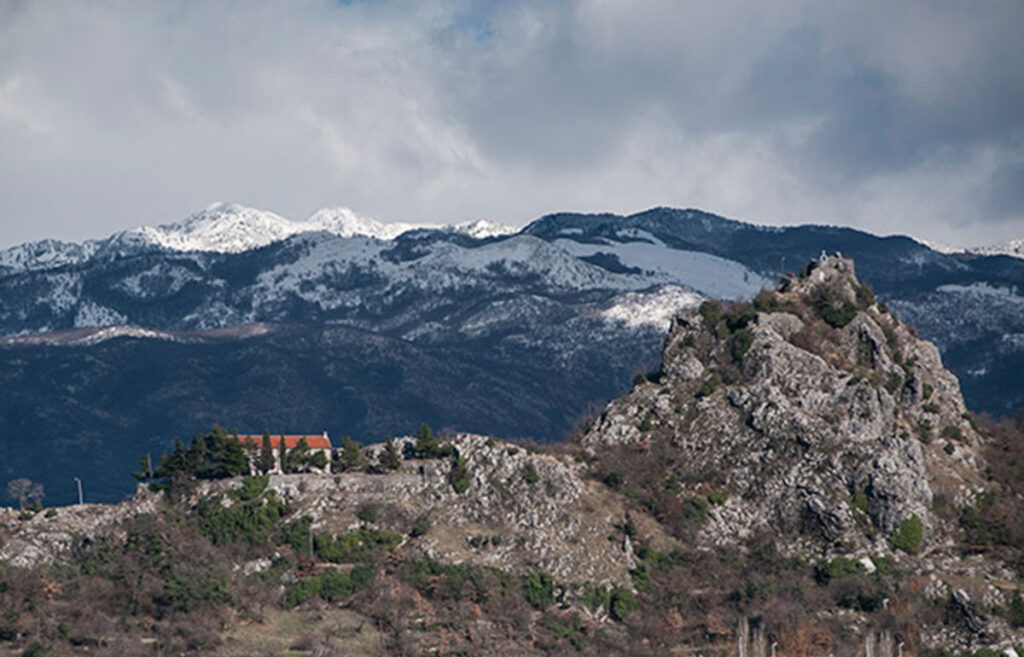 Medun is located about 12 kilometers North- East of Podgorica, in the area of Kuci. It is known for the monumental complex consisting of the remains of the Illyrian city of Meteon, the church of St. Nikola and the birth house of Marko Miljanov, a famous hero and writer, today a memorial museum of the city. Meteon was one of the centers of the Illyrian tribe Labeati, which ruled the entire Skadar basin. It was formed at the end of the 4th or the beginning of the 3rd century BC, on a difficult-to-access ridge that dominates the Medun field. Today, only parts of the massive defensive walls, built in the so-called Cyclops technique are visible. The remains of the city of Medun, with preserved corner towers and ramparts in some places, mostly belong to a medieval Turkish fortress. Among the remains of the fortification is the church of St. Nicholas, that according to tradition, was built at the beginning of the 18th century, on the foundations of an older church. Next to the church there are the graves of Marko Miljanov and his wife Stefa, and below, on a saddle pass, is the birthplace of Duke Marko Miljanov Popovic, a warrior, statesman and writer, one of the most important figures in Montenegrin history of the 19th century. 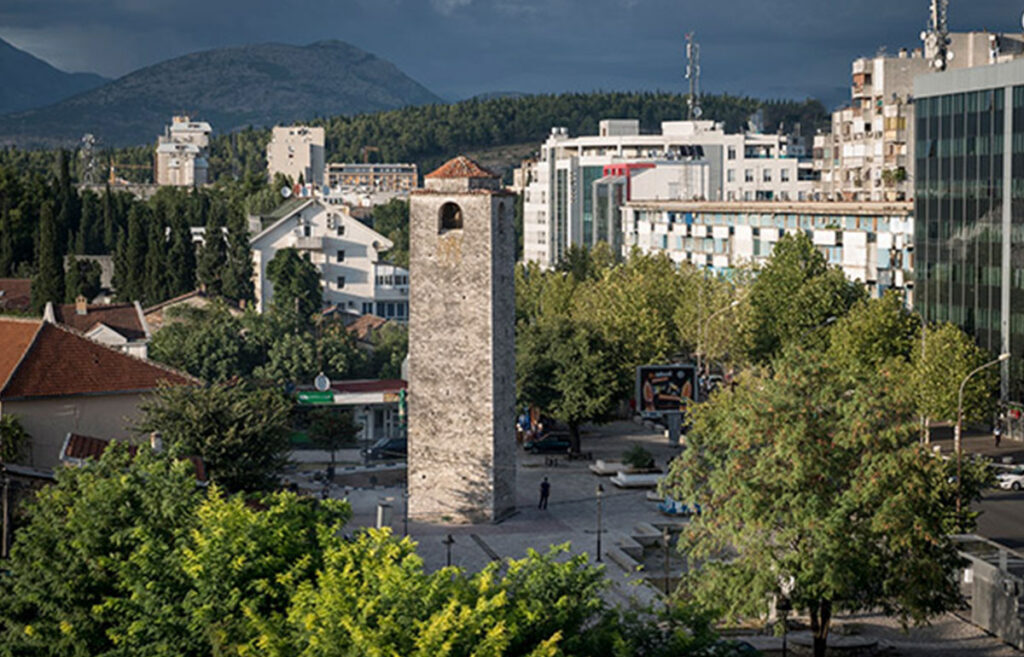 Stara Varoš was the core of Podgorica during the Ottoman rule (1474–1879) in the urban and architectural forms of the city, customs, way of life and oriental characteristics. The symbol of Stara Varoš is the Clock Tower, building located on Bećirbeg Osmanagić Square. It was built in the 13th century by Hafis-pasha Osmanagić. It is an interesting story that at that time he ordered a watch from Italy. In the old town was the Turkish fortress Depedogen (popularly called Ribnica) built in 1474. After the Ottomans conquered the medieval square of Podgorica. The waqf building next to the Clock Tower was demolished in the middle of the 20th century.

The people of Podgorica especially love this favorite romantic place, and the younger generations also popularly call it Skaline. The old stone bridge at the mouth of the Ribnica in Morača, believed to date back to Roman times, is the oldest in Podgorica. According to available data, this bridge is one of the few remains of the former Grimm city that was located in this area. The older inhabitants of Podgorica call this bridge A bridge on Sastavci, because the area around the mouth of the Ribnica in Morača was called Sastavci. The bridge is built of one arch and is only a few meters high. It is believed to be built of river stones and has always been a favorite meeting place for lovers, a gathering place for young and old, where they refresh themselves in a pleasant natural setting by the river in the hot summer months.

The sunset from the “Podgorica Bridge of Sighs” is something that will not be forgotten. 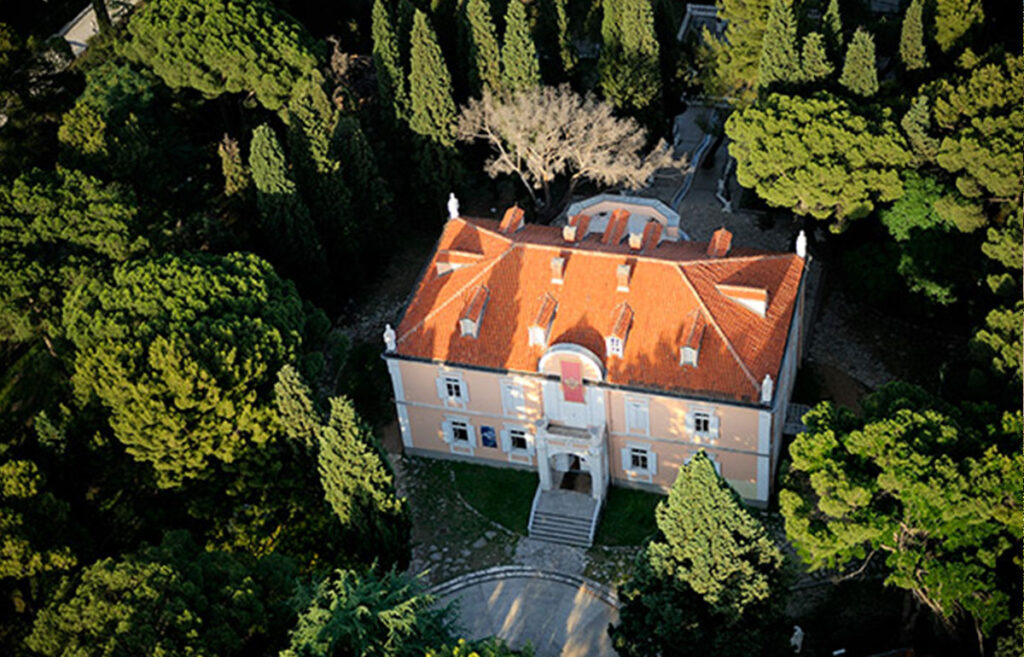 The former winter castle of King Nikola I Petrović is surrounded by a beautiful park forest and during the summer months it represents a unique art and exhibition scene and is one of the favorite places of fellow citizens. The complex in Podgorica on a hill on the right bank of the Morača was built in the 19th century. The central building is the Castle of King Nikola, which was built in the period from 1891 to 1894, and during the past was the official winter residence of the last Montenegrin king. The Perjanički dom and the Church of St. Dimitrije, which was also the family chapel of Nicholas I, were built next to the castle. Today, the palace complex in Kruševac is the seat of the Center for Contemporary Art, an exhibition space, a botanical garden, as well as a music pavilion, which was built at the end of the last century. 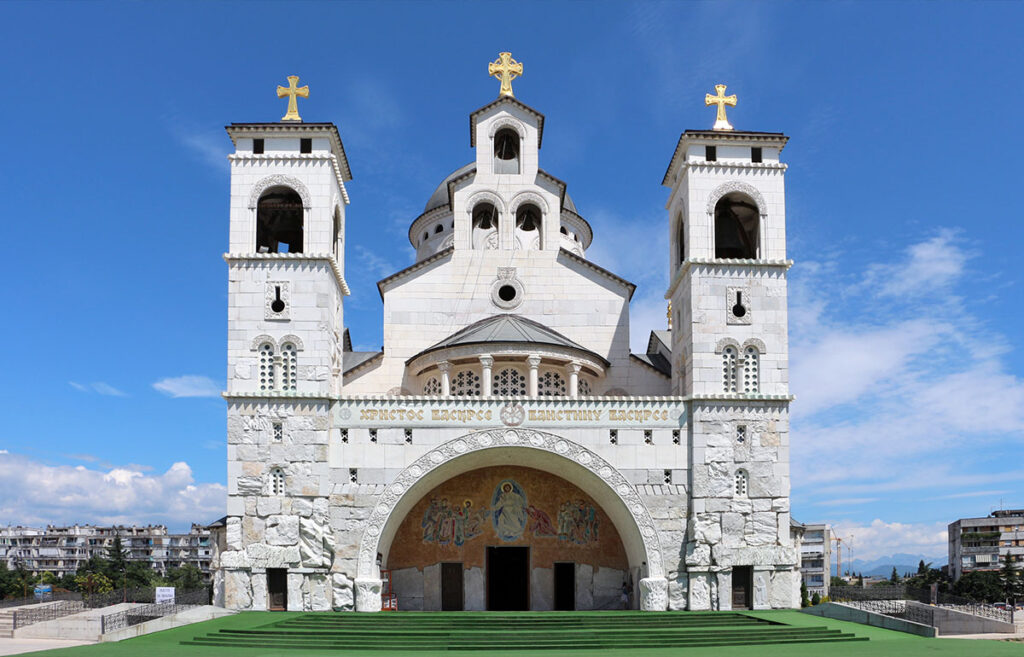 The Church of St. George is located at the foot of Gorica, the hill after which the city was named.It was built between the IX and XI century. During the turbulent history it had several repairs and rebuildings, so its original look has not been fully preserved. The interior of the church is decorated with frescoes of an anonymous artist. And there are also monastery complexes: Dajbabe (1897), Ćelija Piperska (1637) and Duga Moračka (1755).

The Osmanagić Mosque and the Clock Tower were built by Hadži Mehmed-pasha Osmanagić at the end of the 18th century. In the courtyard of the mosque is the Turbe of the builder, Mehmed – pasha Osmanagić, where he is buried. During the Second World War, it suffered great damage by bombing, and it was in a dilapidated condition until 1997, when it was thoroughly renovated.

The Roman Catholic Church of the Sacred Heart of Jesus was built in 1969 and in terms of architecture it was an innovation not only in the sacral but also in the overall Montenegrin architecture after the Second World War. 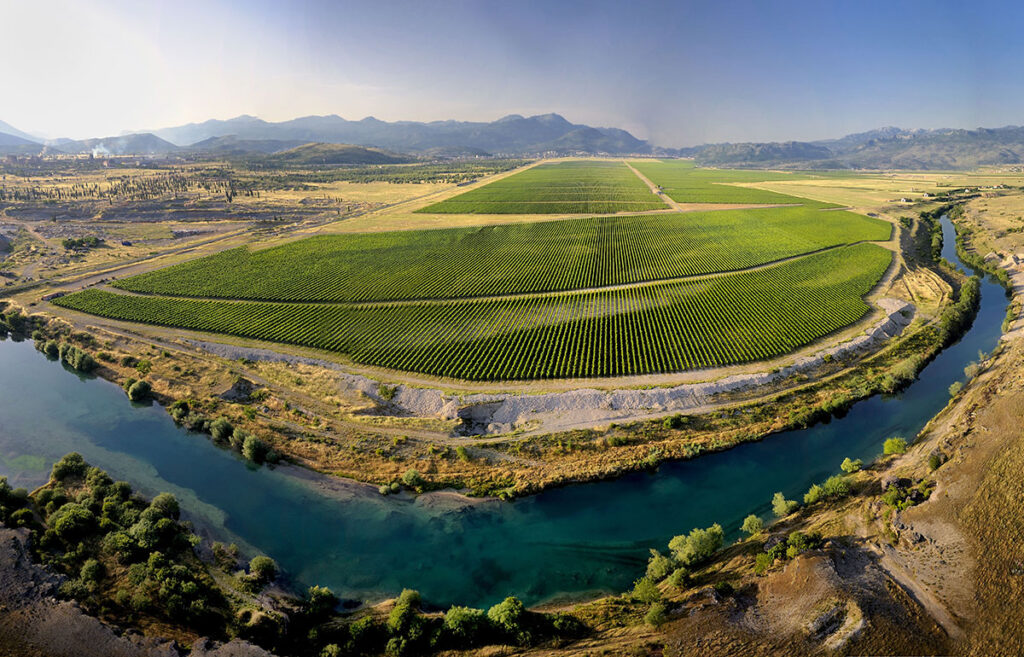 The Museum of Podgorica was founded on April 8, 1950. With the integration with the Modern Gallery and the Risto Stijović Gallery in 1974, this institution exists as Museums and Galleries of Podgorica. The permanent exhibition contains a rich archaeological, cultural – historical, ethnographic and historical collection.

Museums and galleries of the city 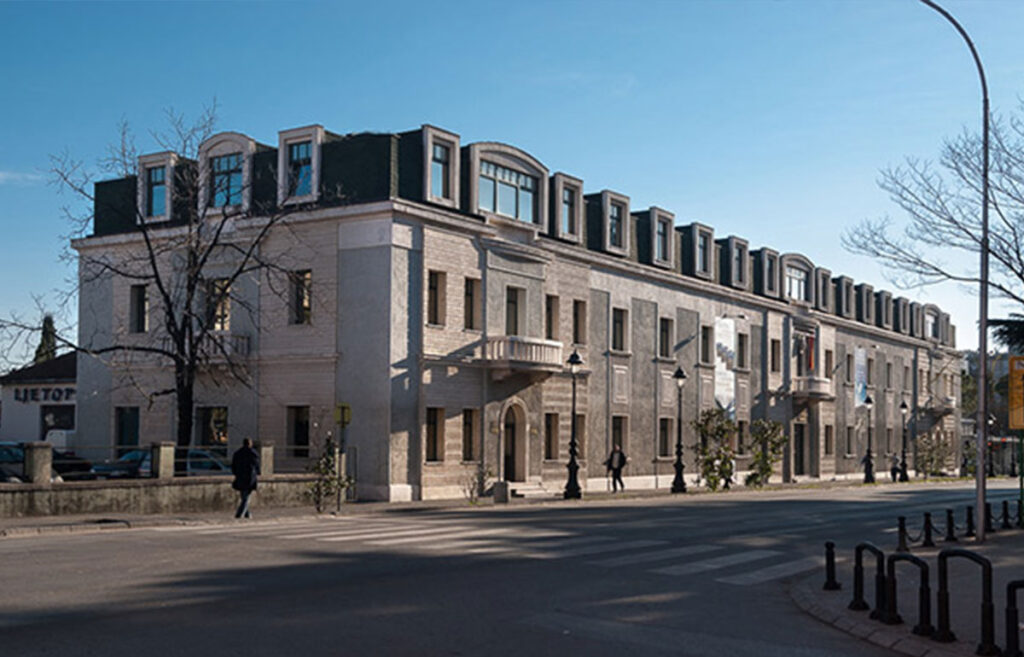 The Museum of Podgorica was founded on April 8, 1950. With the integration with the Modern Gallery and the Risto Stijović Gallery in 1974, this institution exists as Museums and Galleries of Podgorica. The permanent exhibition contains a rich archaeological, cultural – historical, ethnographic and historical collection. 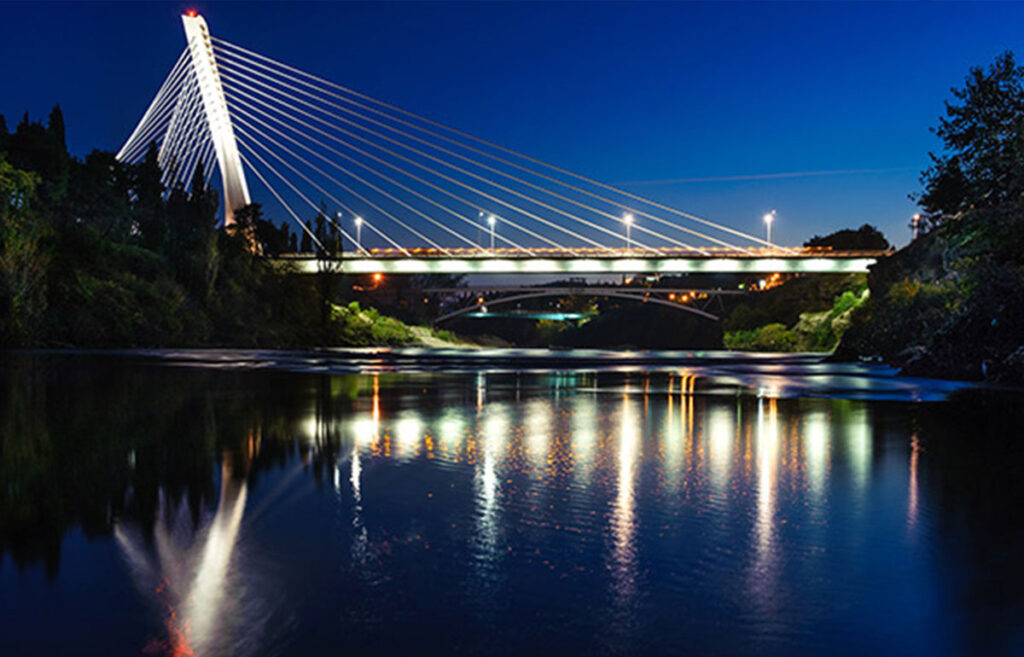 Millennium Bridge was built over the largest river in Montenegro – Morača and connects an Old and a New Town. This is a suspension bridge with 57 meters high pylon above the road, with 12 cables, while another 24 are attached to counterweights. It is about 140 meters long across the river (173 meters from one end of the bridge to the other) and 24 meters wide. It was built in less than a year, and its opening coincided with the country’s entry into the new, 21st century – the era of technology and progress, which is reflected in the design of the bridge. The Millennium Bridge was built on the basis of a project by Balkan architect Mladen Ulićević, a professor of civil engineering.