Novosti
Home Events in the city In KIC in MARCH… Concerts of sevdah, classical and choral music, film premieres, literary promotions and tribunes… 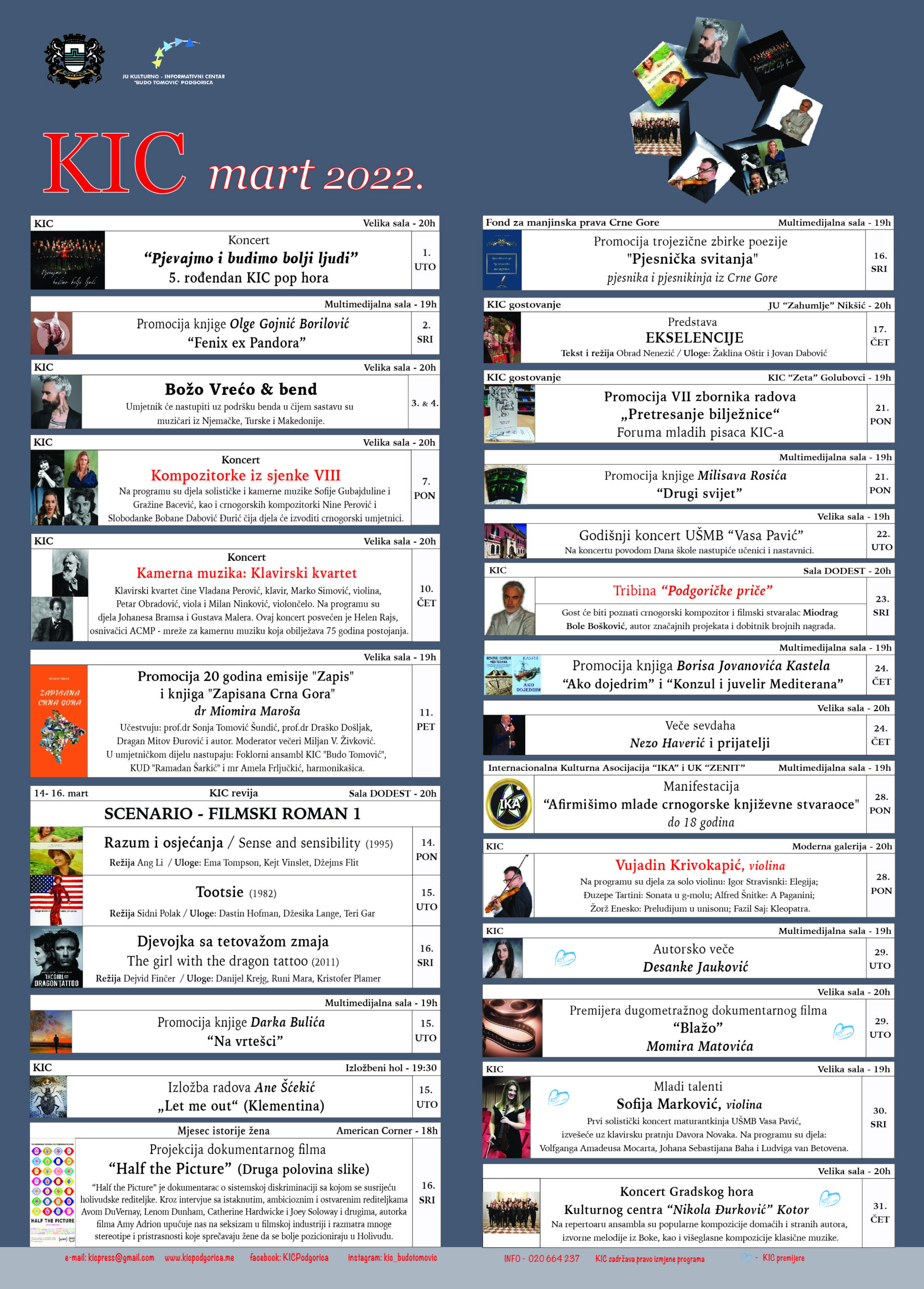 Domestic and regional artists of various profiles will be guests of the Cultural and Information Center “Budo Tomović” in March.

The music program of KIC will again stimulate the interest of the audience due to the guest appearances of both well-known and non-established musicians and ensembles. This year, within the cycle “Composers from the Shadows” whose goal is to encourage women’s music, the program will includeworks of solo and chamber music by Sofia Gubajdulina and Grazina Bacevic, as well as Montenegrin composers Nina Perovic and Slobodanka Bobana Dabovic Djuric whose works will perform Montenegrin artists.

The Vasa Pavić Art School of Music and Ballet will hold a concert on the occasion of the School Day on March 22, and the first solo concert of violinist Sofija Marković will be held on March 30th.

Five years of existence, which marked almost 60 successful performances and guest appearances both in our country and in the region, the popular KIC pop choir will celebrate on March 1with a concert called “Let’s sing and be better people”.

With the support of the band, which includes musicians from Germany, Turkey and Macedonia, sevdah performer Božo Vrećo was a guest at the KIC 3. on March 3rd and 4th. The City Choir of the Cultural Center “Nikola Đurković” Kotor will present a diverse repertoire to the Podgorica audience on March 31, and fans of Montenegrin original music will enjoy a solo concert by Nezo Haverić on March 24.

In March, the guest of the forum “Podgorica Stories” will be the famous Montenegrin composer and filmmaker Miodrag Bole Bošković, and on March 29, we will get acquainted with the work of Desanka Jauković.

The promotion of the 20th anniversary of the show “Zapis” and the book “Zapisana Crna Gora” by Dr. Miomir Maroš will take place on March 11, and the new literary editions “Ako dojedrim” and “Konzul i jevelir Mediterana” by Boris Jovanović Kastel will be promoted at KIC on March 24. KIC will also host the promotion of the book “Fenix ​​ex Pandora” by Olga Gojnić Borilović, the book “On the Carousel” by Darko Bulić, the trilingual poetry collection “Poetic Dawns” by poets from Montenegro, the book “The Other World” by Milisav Rosić, and manifestation “Let’s affirm young Montenegrin literary creators” up to 18 years.

The KIC film program will begin in March with the realization of the main project of this year’s film program, which is the presentation of the script as a crucial part of the film. Therefore, within the magazine “Scenario – film novel 1” from March 14 to 16, we will show: “Reason and feelings” (1995), “Tootsie” (1982) and “Girl with a dragon tattoo” (2011).

The feature-length documentary “Blažo” by Momir Matović about the prominent revolutionary and national hero Blažo Jovanović will be premiered on March 29 at the KIC.

After the recent premiere of the play “Excellencies” produced by KIC “Budo Tomović”, it continues its theatrical life, so after KIC ,”Zeta” on March 17, will be a guest at the Public Institution “Zahumlje” Nikšić.

On March 21, the Forum of Young Writers of KIC will present its recently published seventh collection of papers “Searching a Notebook” as part of a visit to the Cultural and Information Center “Zeta” in Golubovci.

Part of the presentation of current visual art will be the exhibition of works by Ana Šćekić “Let me out” (Klementina), which will be opened in the exhibition hall of KIC on March 15. 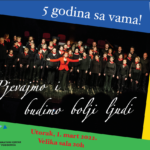 FOR THE FIFTH KIC POP CHOIR BIRTHDAY - CONCERT "Let's sing and be better people"February 28, 2022
Repertoire of the Music Center of Montenegro for MarchMarch 10, 2022 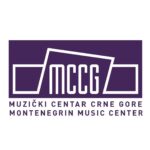