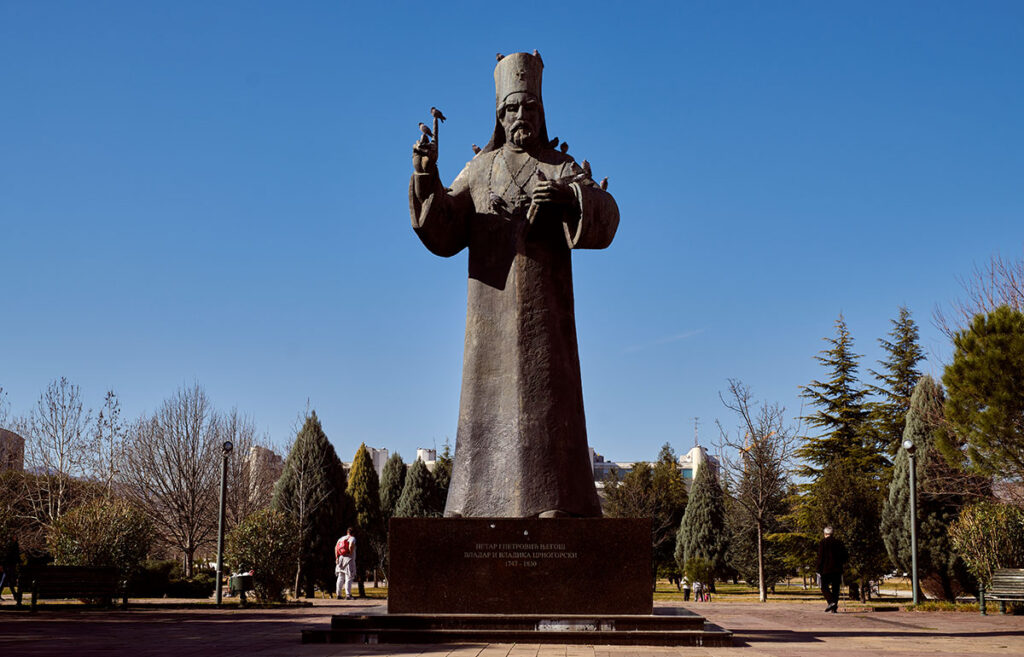 The bronze monument, almost seven meters high, is dedicated to the state-builder, military leader and church leader of Montenegro, Peter I Petrovic Njegos, who was canonized as St. Petar Cetinjski.

St. Petar Cetinjski was a remarkable figure in the political and cultural history of Montenegro, and his entire life was devoted to the struggle for national liberation of his country, its independence, economic and cultural prosperity.

The monument is located in a section of University Park on George Washington Boulevard.

The author of the monument is MSc. Nenad Soskic, an academic sculptor. 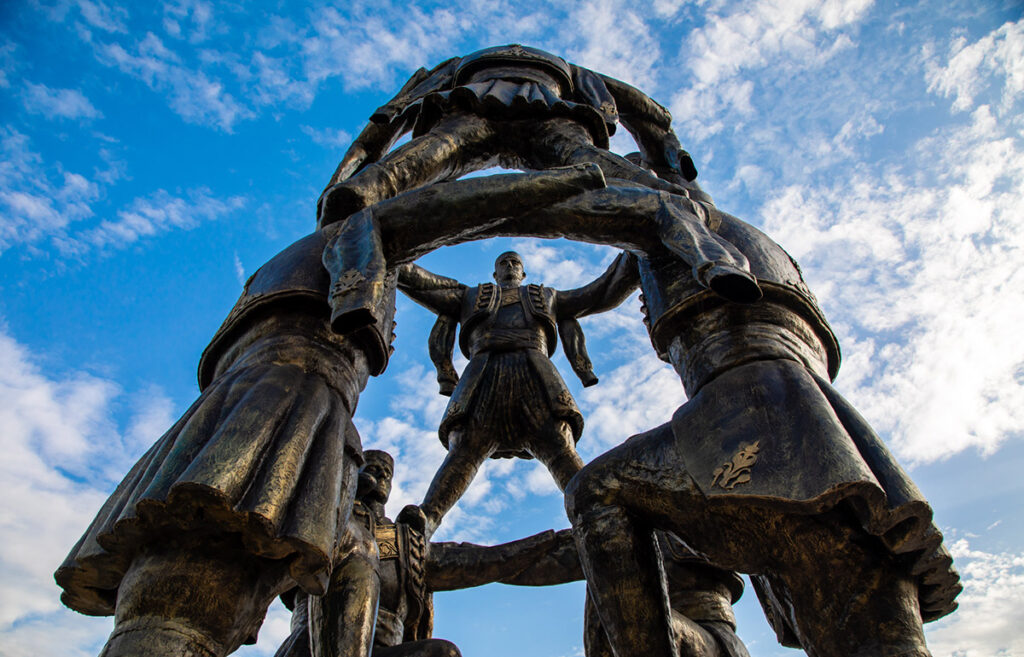 The Montenegrin Oro Monument is a symbol of Montenegrin culture and tradition. It is the work of sculptor Mita Zivkovic. It is more than five meters high and consists of eight sculptures. The monument is located in the of St. Petar Cetinjski Boulevard. 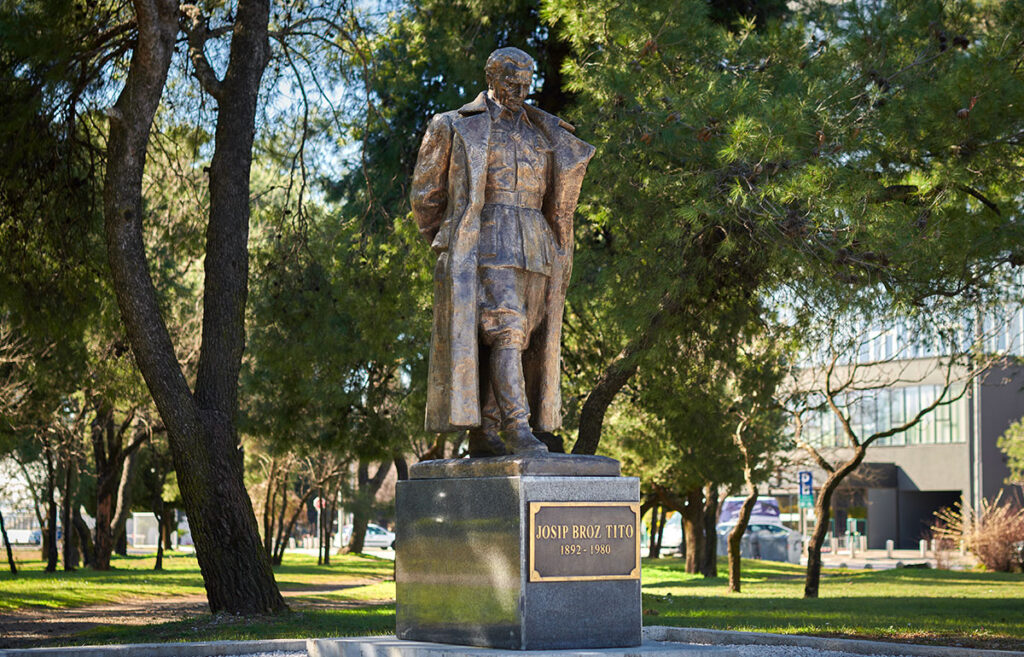 The monument to the lifelong President of the Socialist Federal Republic of Yugoslavia (SFRY), Josip Broz Tito is located on the St. Petar Cetinjski Boulevard in Podgorica. 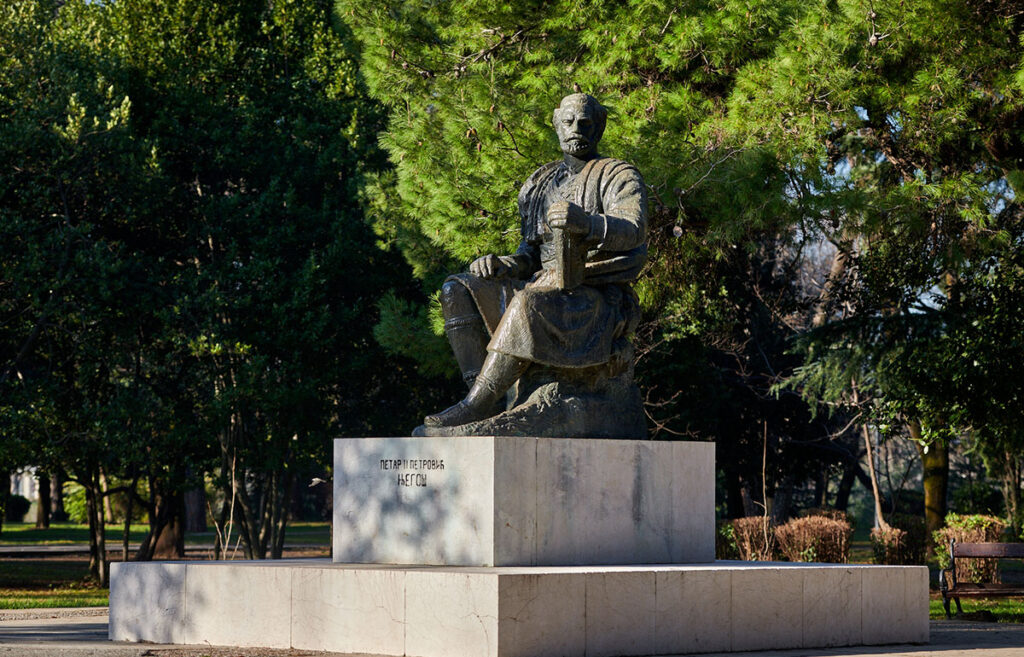 Peter II Petrovic-Njegos was the spiritual and secular ruler of Montenegro, poet and philosopher. As a ruler, he made the foundations of the modern Montenegrin state by establishing the authorities: the Senate, the Guard and Perjanik and introducing tax payments. His most famous work, “The Mountain Wreath“, was rated as “manuscript of genius creator”.

Petar II Petrovic Njegos monument, the work of academic sculptor Sreten Stojanovic, was built in 1954. and located on the Boulevard of Stanko Dragojevic, in the same named park. 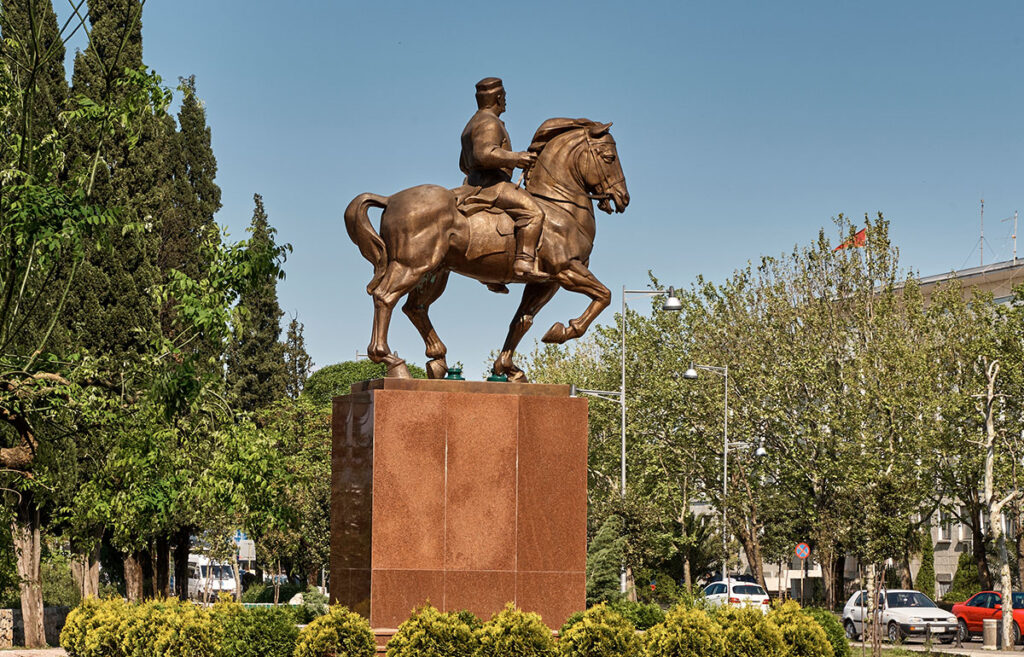 The monument was unveiled in 2005, in a park on St. Petar Cetinjski Boulevard, and the author of the monument is MSc. Risto Radmilovic, an academic sculptor. 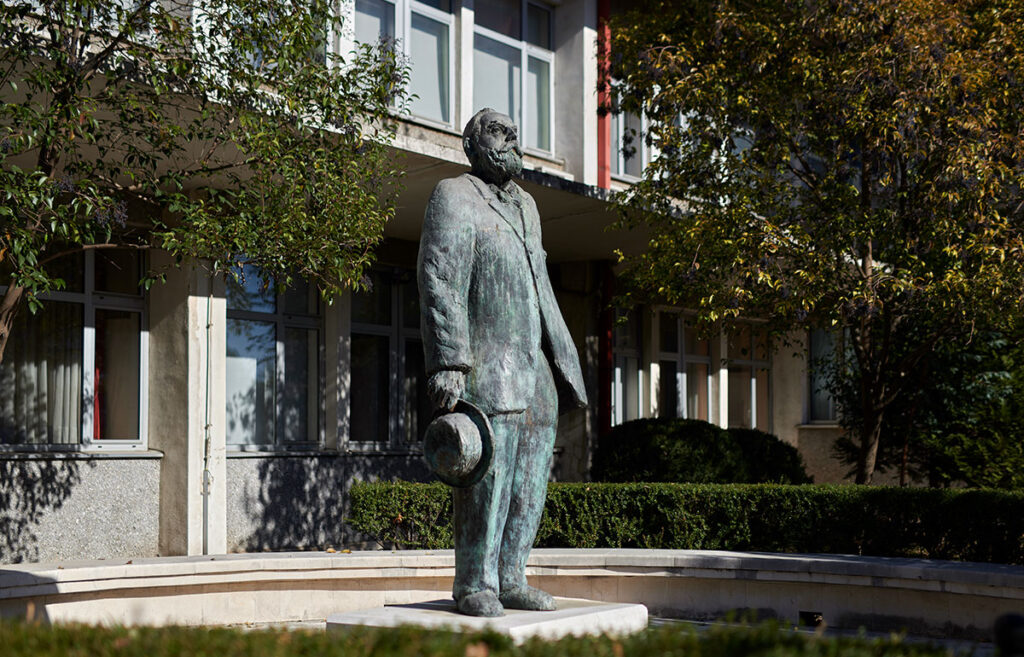 The monument was unveiled on 19th December 2002, on the occasion of the Liberation Day of Podgorica. It is the work of Pavle Pejovic, an academic sculptor and Maja Velimirovic-Popovic, an architect.

Valtazar Bogisic (Cavtat, 1834 – Rijeka, 1908) is the founder of Montenegrin legal thought, author of the General Property Code for the Principality of Montenegro, proclaimed in 1888 and translated into five languages, Minister of Justice of Prince Nikola and Professor of Slovenian Law at the University of Odessa.

The monument is located in 13. Jul street, on a plateau in front of the building of Law Faculty. 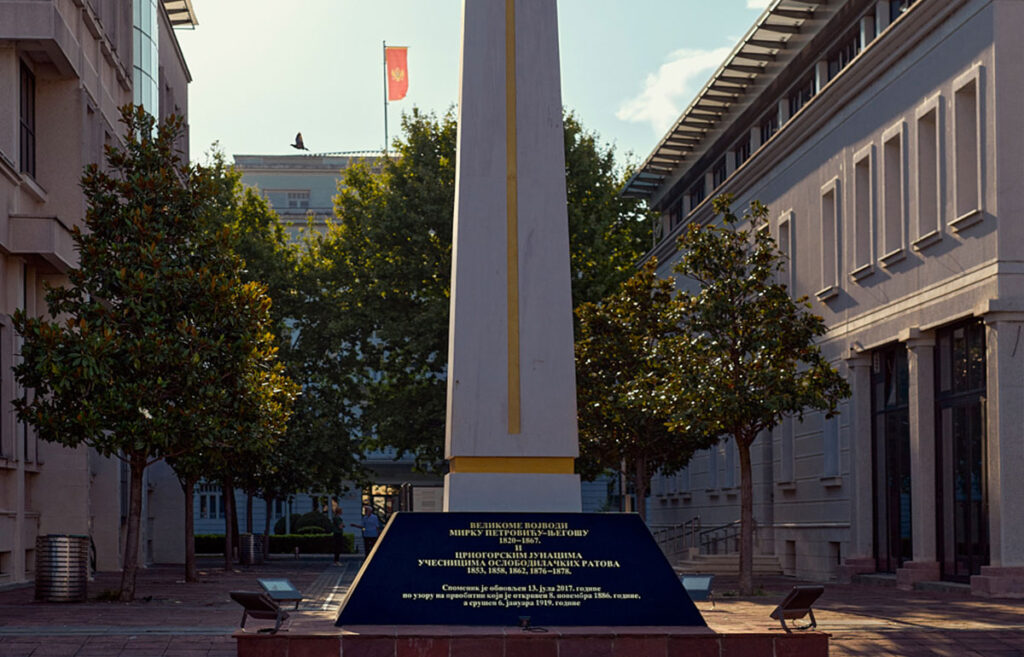 The monument was rebuilt on 13th July, 2017, modeled on the original one, which was unveiled on 8th November, 1886, during the official opening of the landscaped square, attended personally by King Nikola, and demolished on 6th January, 1919, after the dynasty Petrovic was dethroned and the abolition of the Montenegrin state. It was one of the first public monuments in Montenegro. It is located on Independence Square and the author of the monument is Dimitrije Popovic, an academic painter. 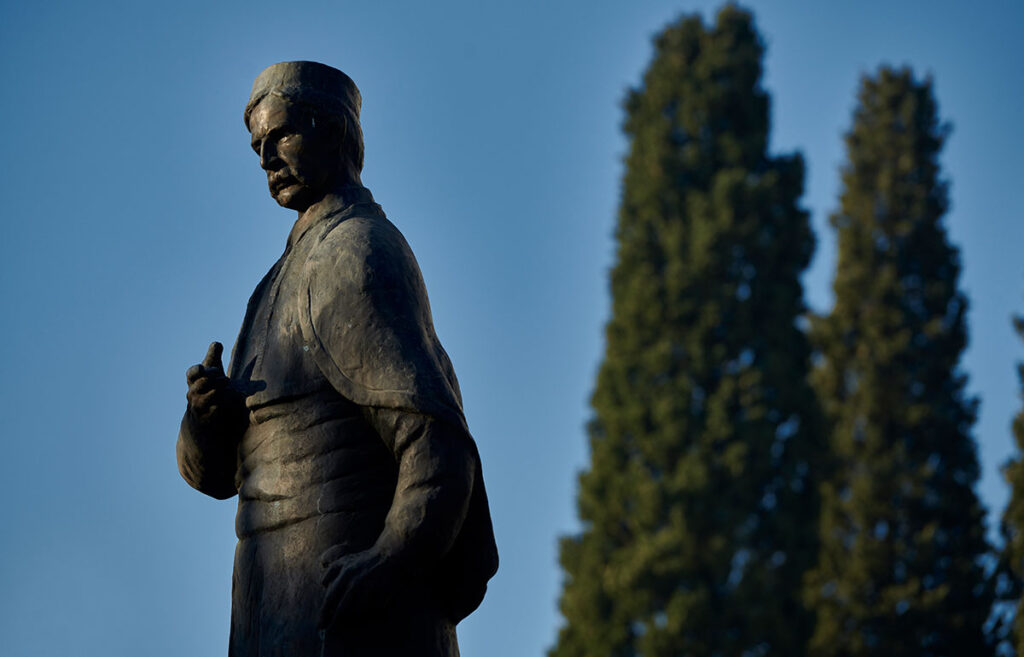 The bronze statue of Duke Marko Miljanov was made on the occasion of the centenary of his death. The author of the monument is Oto Logo, the academic sculptor. It was unveiled on 4th May, 2001.

Marko Miljanov Popovic, a famous Montenegrin hero, duke, military leader and writer, was born in Medun in 1833. He stood out with a clear mind, physical strength and courage. He was a brave warrior, but also very active in the settlement of the hill and Arbanasi tribes. He was a brave warrior, duke and brigadier of Kuci and Bratonozici, senator and first military and civilian warden in liberated Podgorica in 1879.

The monument is located in Njegoseva Street, on a plateau in front of the Capital City- Podgorica building. 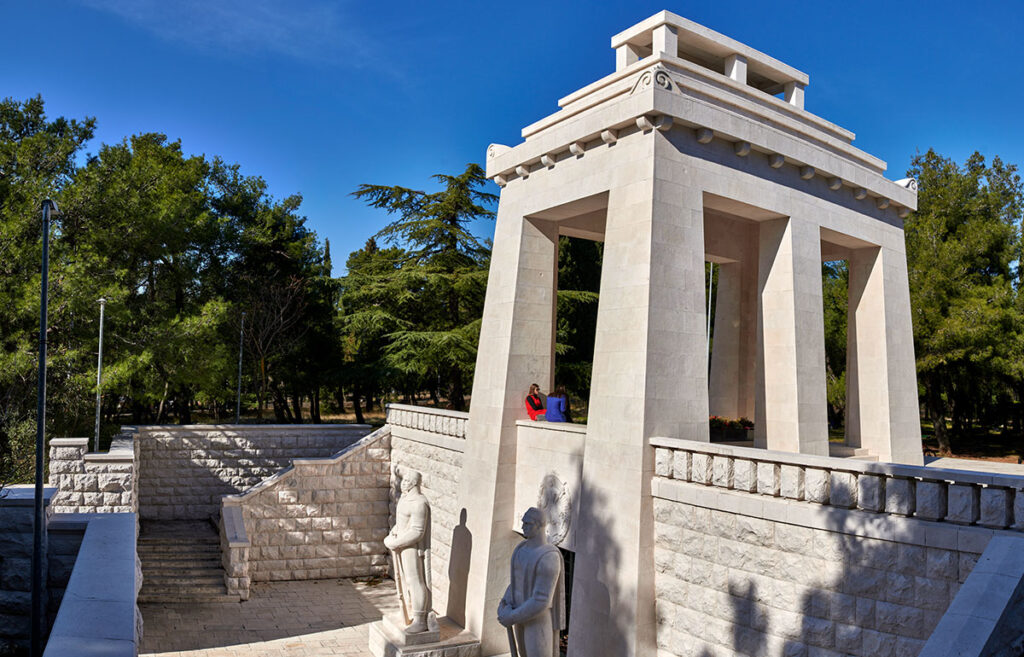 Partisan the Warrior Memorial is located on the hill Gorica and has the status of a cultural property. It is a mausoleum type with the remains of 66 national heroes of Montenegro, killed in the People Liberation War and of the two revolutionaries, in the period 1941-1945. It was unveiled on 13th July, 1957. The authors of the monument are Vojislav Djokić, ing. architecture and Drago Djurović, an academic sculptor. 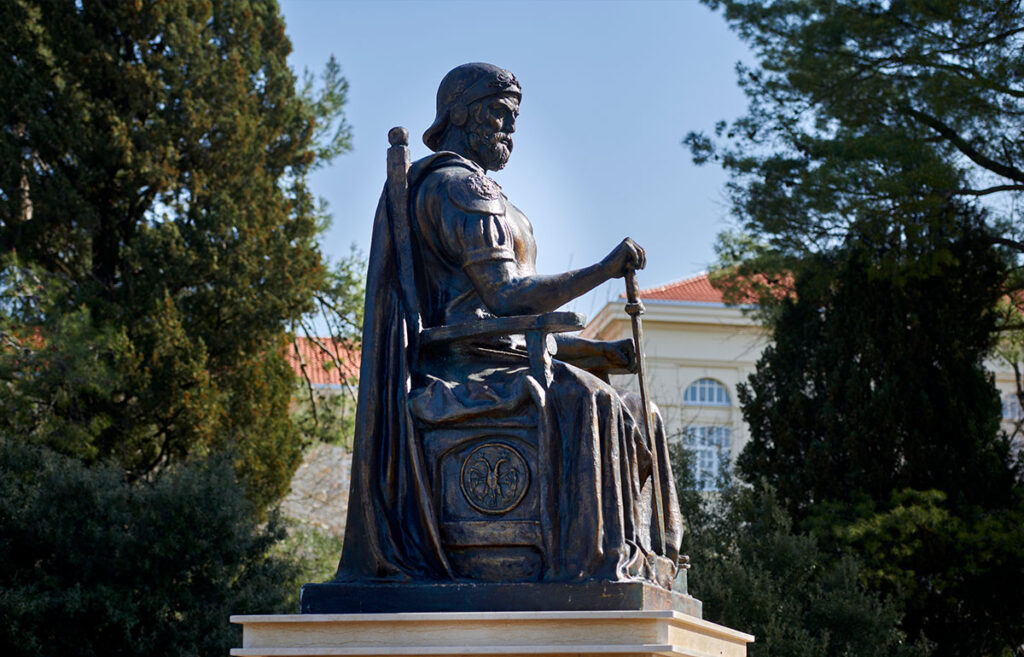 Ivan Crnojevic was the Lord of Montenegro, the most powerful ruler of the third Montenegrin state dynasty of Crnojevici.

The Lord Ivan Crnojević is the strongest link in the long historical sequence formed by the four Montenegrin dynasties. He is the most vivid example of the centuries-old struggle of Montenegrins for freedom and dignity. Although the period of his rule lasted only a quarter of a century, Ivan Crnojevic has remained to this day very present in life of Montenegrin people, thanks to his state achievements.

The monument to Ivan Crnojevic, the work of sculptor Mita Živković is made in bronze and is located in the park near the Gymnasium “Slobodan Škerović”. 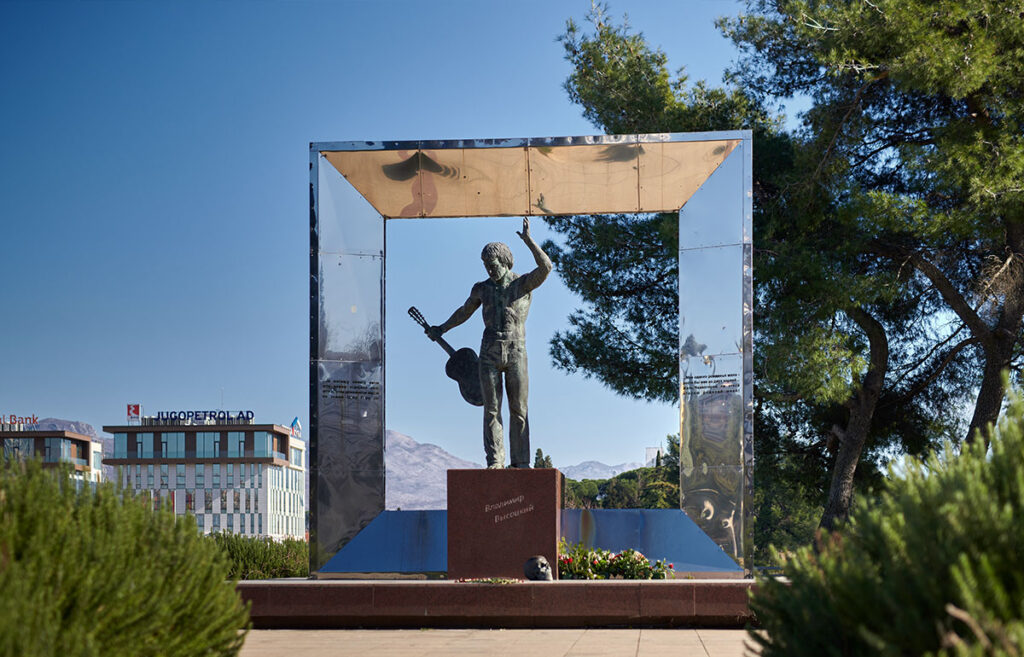 A statue of Vladimir Visotsky is located on the banks of the Morača River, between the Moscow Bridge and the Millennium. Visotsky was a famous Russian poet and singer. He was in Podgorica while working on a film for the former TV station Titograd and expressed his love for Montenegro in his song “For the Montenegrins”, saying: “I regret in this life not to have two roots and that I cannont say Montenegro is my second homeland”. 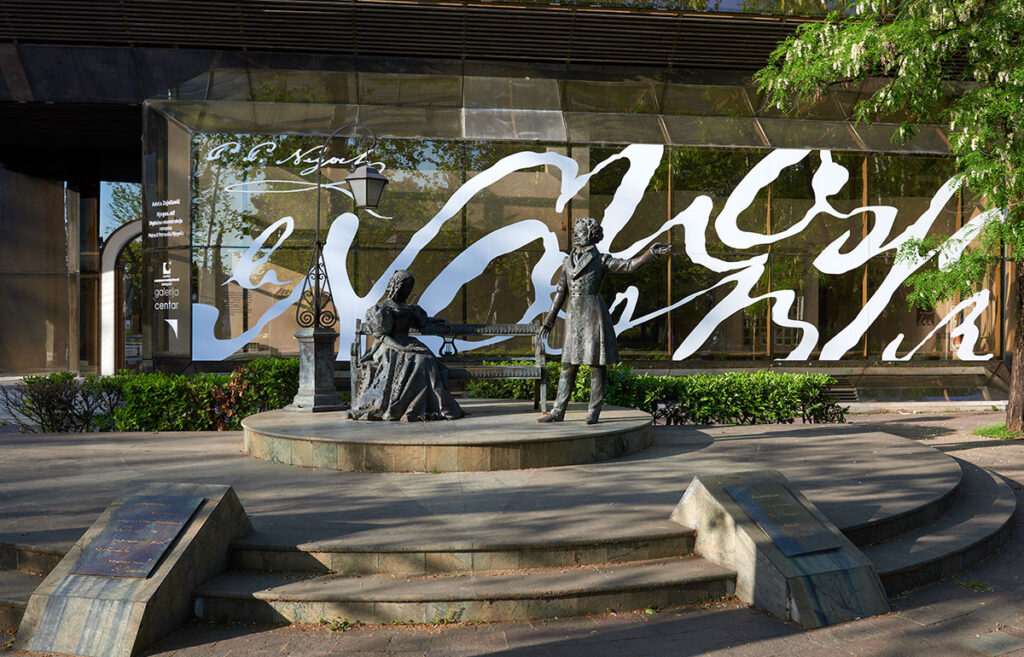 This bronze monument is located on the corner of Njegoseva Street, near the Blazo Jovanovic Bridge. It shows the famous Russian poet Pushkin reading poetry to his wife, Natalia Gonchareva.

The statue which is a gift from Moscow was built in 2002 as a sign of friendship between Russia and Montenegro and their cooperation in various fields. 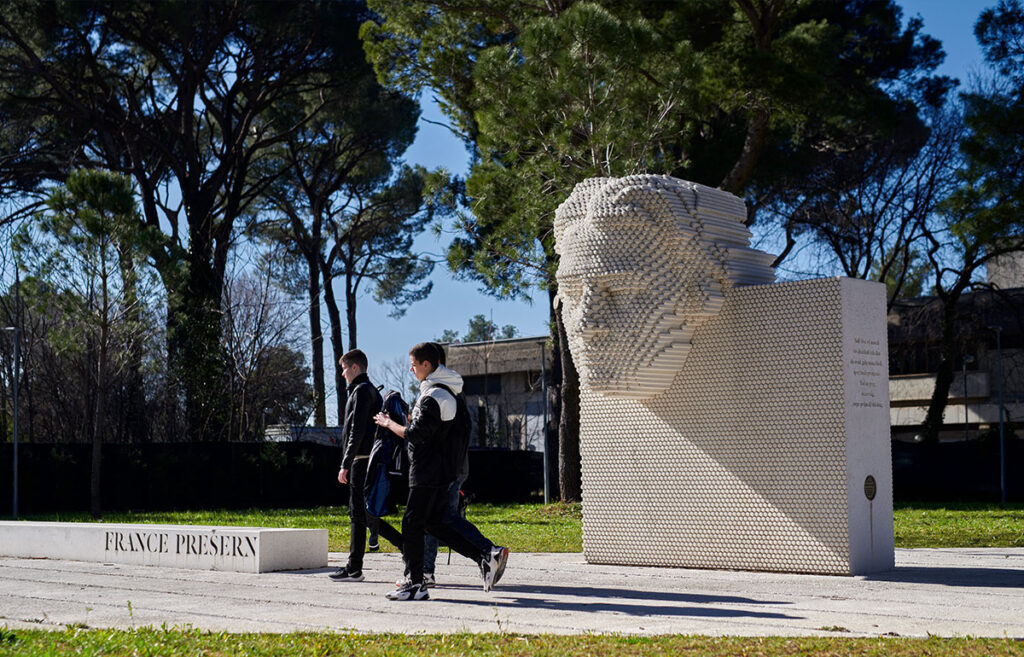 The monument is located in Moskovska Street, in the same named park , and was built in honor of the extremely good political, economic and cultural relations between Montenegro and Slovenia. At the same time, a monument to Njegos was built in Ljubljana.

The author of the monument is Rok Znidarsic, an architect from Ljubljana, winner of the largest Slovenian award in the field of art, the Presern Award, and the monument to the Slovenian poet and the Presern`s Park are gift from Vojislav Kovač, Honorary Consul of Montenegro in Slovenia. 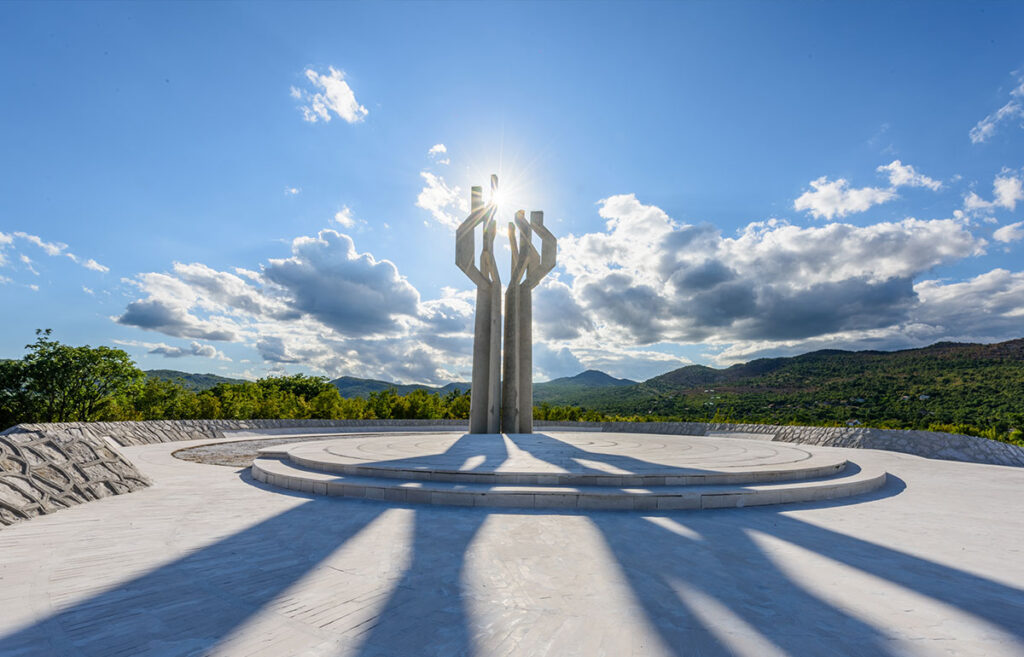 A monument on Barutana is a memorial dedicated to the inhabitants of Lješanska nahija, the victims of the liberation wars in the first half of the 20th century.

The monument was built according to the first-prize-winning conceptual design of the Montenegrin architect Svetlana Kana Radević, and its construction was completed in 1980, when it was opened to the public. 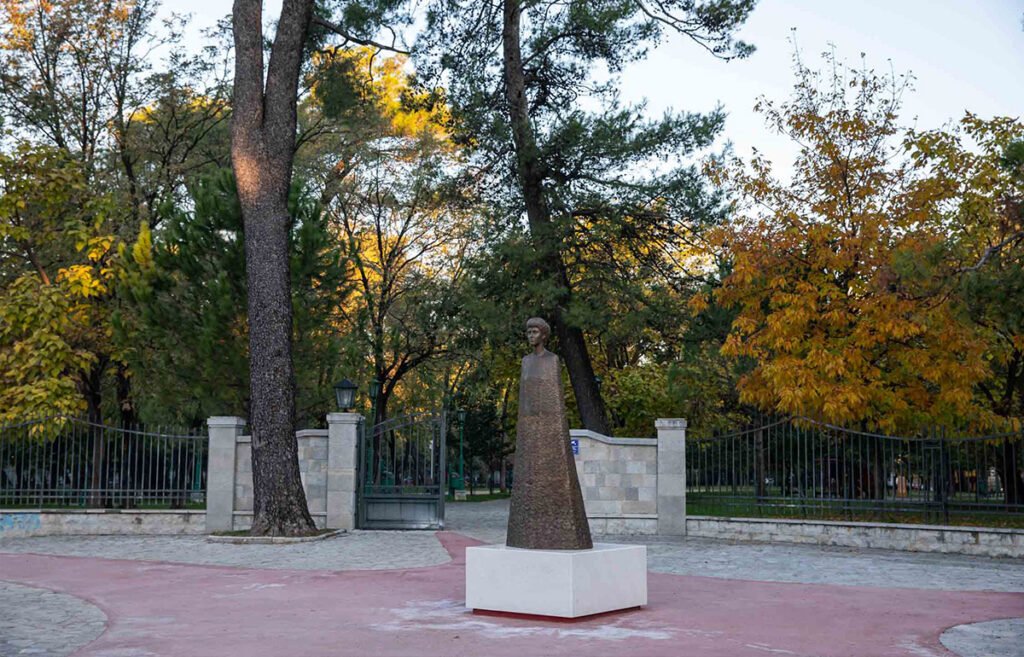 The monument to Princess Jelena Petrović Savoja is located in Podgorica, between two parks, a children’s park and a court park, in the center of which is the cultural and historical monument Petrović Castle. The sculpture was made by Montenegrin sculptor Adin Rastoder. The artist’s idea was to present Princess Jelena as a young person who is the embodiment of Montenegrin female wisdom, strength and beauty, free of all ornaments, crowns, royal ribbons and superfluous things to make her bright being come to the fore.

The monument is made of bronze, and the pedestal is made of stone. It was ceremoniously unveiled on 21st May, 2021. 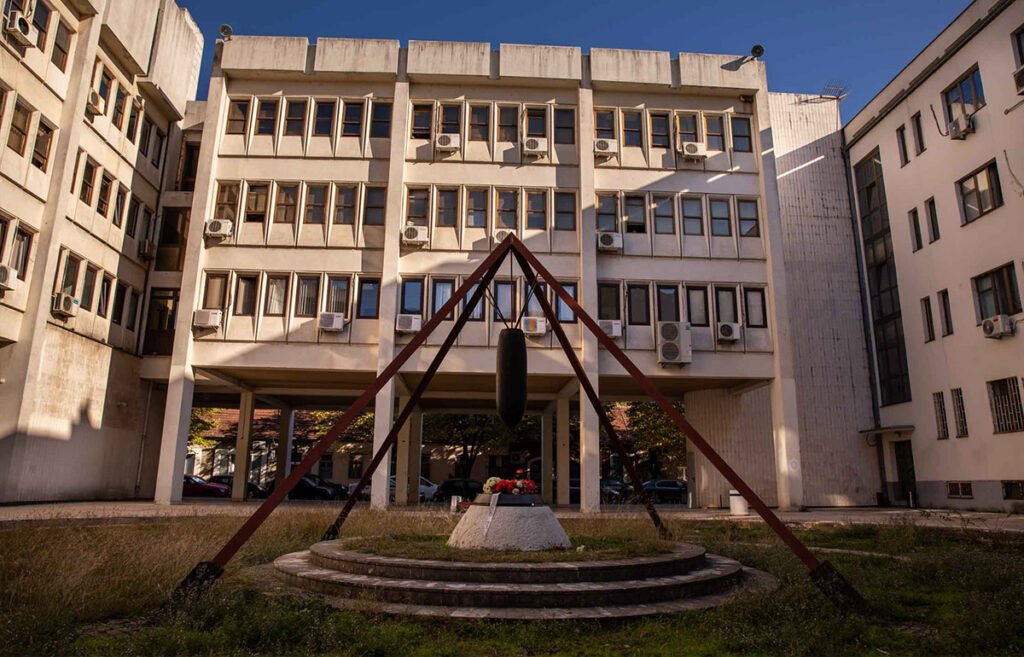 In the very city center, in a quiet environment of a business – residential block, there is a memorial, a testimony to the long but also the suffering past of the city. Podgorica was the scene of the tragic death of a large number of citizens with aerial bombings in the First and especially in the Second World War. One of the many bombs that has been found and deactivated during the construction of Podgorica`s infrastructure is an integral part of the monument dedicated to the victims of the bombing. The monument, whose author is the famous Podgorica architect Vasilije Knežević, was unveiled on December 19th, 1994, on the occasion of the celebration of the 50th anniversary of the liberation of Podgorica. It reminds of the drawn target and sends a clear visual message about the huge human and material sacrifices.